What does it take? 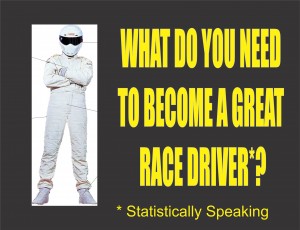 Some of us still dream of being discovered and getting that chance to race PRO! Some of us have given up on our shot but have a son or daughter that you feel might have what it takes. The age old question in racing is… how do you unlock that magic door? What exposure, exercises, physical make-up or opportunities create that SPECIAL chance to run with the BIG dogs. All of us have seen great drivers who defied the odds and found a way… or were discovered in the most bizarre way. Mark Webber should never have been a race driver with his 6 foot tall 165 pound build when the average is the 5’6″  to 5’7″ of Hamilton and Alonso. Sure, there are freak occurrences but when you look at it from an analytical statistical standpoint, you uncover some interesting things. Here’s how to help your son be a great race driver,

1. Take a look at this picture and answer the question? If you guessed light color eyes, you are correct. There is a definite trend in all motorsports to a large portion of drivers having blue, gray to light hazel colored eyes. According to vision specialists, darker eyes absorb more light waves through the eye and less light reflects inside the eye. Meaning, darker eye colors are less susceptible to glare or have better contrast discernment while lighter color eyes have better night vision. Some have speculated that F1 drivers blink less… meaning they are focused on objects approaching at a higher rate than someone who blinks more frequently and has to re-focus after each blink. The truth? It might be they are perceived to be more physically attractive from a marketing standpoint … not really any concrete evidence why but, there is a trend. If your son has blue or lighter colored eyes, you get two points.

Body mass is another hot topic. Massa is the smallest F1 driver currently at 130 pounds while Adrian Sutil is the heaviest at 165 pounds. F1 drivers lose anywhere from 9 to 12 pounds over the course of the average race. In 2009, Alonso worked his weight down by ten pounds to help the team. At the start of the race, his in car water bottle broke and he was unable to take in fluids during the race. He lost another 11 pounds over the course of the race and collapsed from dehydration shortly after the race. Low body fat and good physical condition is vital to success. Your inputs from your car come to you from your hands, feet and rear. Additional padding (fat) reduces your ability to receive these inputs. So… the average height weight you are shooting for?  5’6″ and 150 pounds with a low body fat.

Sex is another variable. While women have proven they can be excellent drivers, statistics still say it is predominately a male driver in the seat. Woman have the advantage of less weight, less body mass and less testosterone which are all sound advantages. One day, we may find the reason more women have dominated in this sport is the evolution of society giving opportunities at the wheel earlier enough for them to get good. Until then, expect there will be several female drivers who make good showings and shock the racing world. It will happen. The term of being  “beaten by a girl” will hold a lot less damaging impact to the male ego in the future.

Parents – hands down single most common trait shared by successful drivers is parents of means. Mom and Dad finance junior’s career beginning in carts and his career began at 6 years old. That many years of racing, latest in parts and best of machines and coaches… is a good way to give your kid a shot at the big time. If you look around, you will find a youtube video of Sebastian Vettel doing 50 in a kart on a banked track at the age of 5 1/2 years old. Experience trumps money but the money pays for that needed experience.

Attitude is another key. Many of us have heard stories of the kid on course to be a child prodigy concert pianist who at the age of 9 said, “I don’t want to do it anymore.” If your son or daughter has the passion, loves racing, wants to drive and wants to win… you may have a winner on your hands. The passion has to come from within but parents can have a positive affect through encouragement and support… and equally damaging if they push too hard and make the pressure too great.

So… number #1 statistically is parents with money that can create opportunities. #2 Passion.  I think after that, there are too many variables to predict. Suffice it to say that after those two items, anything is possible. Perhaps it is wiser to want our kids to be happy and share our love for racing and motorsport… as it is less expensive, more enjoyable and builds friendships and memories that will last a lifetime… and your  child’s lifetime as well. Statistically, you have a GREAT shot at that one.